Guillermo Del Toro’s latest film is Crimson Peak. Hard to classify, it is at times mystery, horror, and gothic romance. It is a lush production, visually and aurally satisfying.

Edith Cushing (Mia Wasikowska) has been indulged by her successful father and wishes to pursue a writing career. She rejects the standards of early 20th Century Buffalo and is happy with a platonic relationship with a newly established eye doctor who definitely has his eye on her. She scorns the attentions other young ladies have placed on Baronet Edward Sharpe (Tom Hiddleston).

However, when Edward arrives to ask her father for funding of his excavator, she finds herself entranced. Edward, also, swiftly turns his attentions away from his previous target and towards Edith. Edward’s sister Lucille (Jessica Chastain) mutters darkly in hushed conversations with Edward, questioning the change and cluing the viewer into the idea that something is not quite on the up and up with these two.

Oh, and did we mention that Edith can see ghosts? At least when the director wants her to. Sort of like that little boy in The Sixth Sense, the ghosts look horribly scary but share warnings with Edith instead of trying to hurt her. Specifically, “Beware of Crimson Peak.”

Edith winds up orphaned and married to Edward Sharpe in short order. The three of main characters move back to the crumbling Sharpe home, Allardale Hall, which happens to sit on top of a hill of red clay. Edith is of course quite startled to hear that her new home is Crimson Peak, but it is too late.

Suffice it to say that the ghosts were correct. Edith investigates what has been going on in the house as it gets creepier and creepier. In the end, there are some very gory but satisfying deaths and good triumphs over evil in a satisfying but strangely archaic way.

Set design and costuming are stunning. Edith wears gowns of green and yellow, and at times her eyes seem to glow like a cat. The aural landscape also works well if you are in a theater. The ghosts are scary, even after you realize they aren’t threatening.

Del Toro lifts some visual ideas from The Shining, such as the bathtub scene and the long hallways. These work well to scare us, even though it strains credulity that anyone would take a bath with the door open in a freezing old house.

The one real break to our immersion is Edith surviving a multistory fall (see the trailer) with “just” a broken leg but still being able to run around the house for the final fight scene. Surely Del Toro could have handled that better. Hobbled heroines with bad guys catching up is a well-understood trope, but it doesn’t get used just when it would be most effective.

Overall, well worth seeing in the movie theater, don’t scrimp on the popcorn. An excellent Halloween treat. 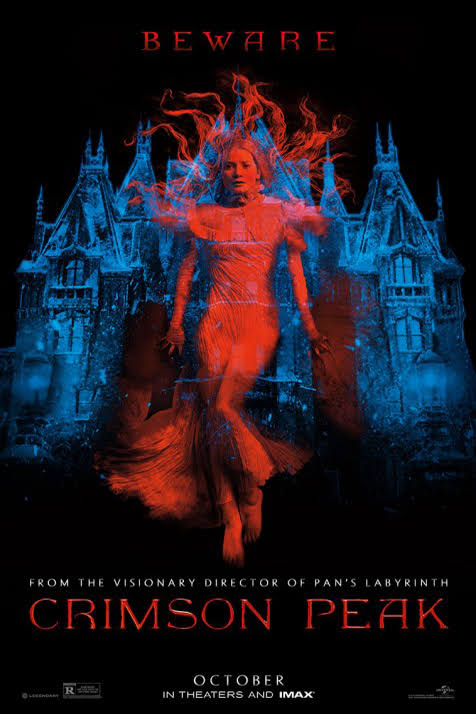